We Build Community Around Active Lifestyles By Hosting Bike Rides

The History of “The Bicycle Fun Club” (BFC)

The Bicycle Fun Club was started by Tom Yarbrough in 1996 as a social club to build community and encourage cycling as an accessible means to better fitness. In 2000, Tom brought the BFC to Trailnet as our first Rides Manager to help with Trailnet’s mission to build “Safer streets for all.” In 2003, with Tom’s untimely passing, Trailnet purchased the Bike Fun Club, and continued to preserve and grow the rides.

The BFC rides featured several distances for each event and allowed beginners to have a safe and marked route while also providing challenging distances for more seasoned riders.

Over its nearly 25 year lifespan, the club remained open to all and grew to serve thousands of recreational cyclists. The club hosted rides ranging from 10-100 miles all over the Greater St. Louis area reaching as far west as St. Charles and East into Illinois. BFC also provided livery service to RAGBRAI with its “The Big F Club,” hosted the Livestrong Ride, as wells as rides at the re-opening of historic Eads Bridge and Stan Musial Bridge. Many of the routes were focused around community festivals as he loved highlighting small towns. Since then the reach has only grown. 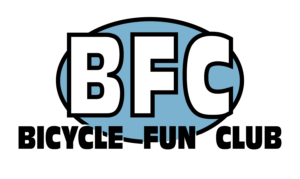 The choice in 2020 to expand the Trailnet Rides program came with a few changes. Many of the rides on the Trailnet Classics calendar were previously housed under the Bicycle Fun Club (BFC) umbrella and are a big part of Trailnet’s history. The decision to rebrand the BFC rides wasn’t easy. The Rides team wanted to honor the BFC, which had such a large place in St. Louis’ cycling history and a great deal to do with where Trailnet is today, so the decision was made to keep the most popular rides on the calendar. The goal is to expand the spirit of the BFC by creating fresh events that will reach new audiences and excite the next 25 years of Trailnet Rides.

Here’s to another 30 years!

For a complete listing of rides, please check the Events Calendar or contact rides@trailnet.org for further questions.